Over the past several years, I’ve occasionally looked into open source alternatives to commercial PCB development packages. While I’m not a full-time board designer, I’ve developed 50 - 80 PCB designs over the past 25 years using a number of packages, among them OrCAD, Allegro, KiCAD and Eagle PCB. I have a licensed copy of P-CAD 2000 which has been my most commonly used tool, however it’s difficult to keep it running under Windows 10, and it’s by far my preference to avoid that operating system environment altogether. In my present job, others may have a need to access and update my designs, some of which may have a service life exceeding 20 years.

I used KiCAD successfully for a project in 2018, however for reasons which are well described elsewhere, I don’t consider it a good option. As I will soon begin work on a set of circuits for a new facility, I’ve spent a couple of days this week looking at current alternatives. LibrePCB shows great promise, though in its current state it doesn’t appear to be suitable for our needs. During my evaluation, I’ve been compiling a list of comments and questions which I share below. Please regard the observations as constructive criticism, and understand that I recognize that some items with which I take issue may be due to a lack of understanding on my part. I think that if a few deficiencies were addressed, LibreCAD would be a superior alternative to the tools presently available to me and will follow its development going forward.

The two major issues I see at present are the lack of device pin numbers on schematics and absence of thermal relief in plane ties. The former provides far too much ambiguity when using the schematic as a resource when working with a circuit in the field, and at the least requires inclusion of a pinout diagram for every component in the diagnostic package. Lack of thermal relief structures seriously complicates board assembly and rework, particularly for pins which are connected to an internal plane as well as an outer layer pour. Of less concern, though still a deficiency, is the limited number of pad options. At the least, rounded rectangles (with configurable radii) should be supported for both SMT and TH pads.

Finally, a few recommendations for enhancements.

A palette would consist of a user-defined subset of available choices, e.g., line widths of 0.15, 0.20, 0.5 and 1.0 mm trace widths, which could cycled through using a keyboard input. In most designs, a limited number of via pad stacks, trace widths, etc., are assigned, so being able to select among them without needing to re-enter parameters is not only faster but also reduces opportunities for error.

I suggest a palette for routing mode because only two of the five modes selected via the right mouse button are of use in most cases and changing the mode while routing a trace is one of the most common operations.

Thanks for sharing your thoughts about LibrePCB.

I’m not sure what you mean exactly with copper pours - AFAIK this is just a different name for planes, or what would you expect to be different?

Is it possible to edit a trace once it’s been placed?

Is there a simpler way to alter layer selection when routing traces than having to use the pull-down menu?

You can change the layer with the shortcuts ‘1’ and ‘7’ (will be changed in the next release).

Does the trace editor support a progressive undo function?

No, pads cannot be imported. Do you have an example how this works in other EDA tools?

Is it possible to specify package pad coordinates in a text file?

Can silkscreen layer elements be manually moved and selectively displayed? The ability to reposition reference designators is particularly important since by default they will often overlap other components, mounting holes, etc… Except in rare cases, device types (names) add only clutter to a layout so are generally omitted.

Text elements can be moved, modified and deleted each separately. But other elements (e.g. polygons) not.

Is there a simple way to view coordinates of individual pads associated with a component?

Support palettes for the following attributes/elements:

Yeah I already had this idea as well. But I for routing mode and grid spacing I think it’s not needed anymore because in the next release these can easily be changed with keyboard shortcuts (with unique shortcuts for all routing modes, so no cycling through the modes is needed anymore).

Provide symbol and package previews when selecting components from libraries.

Where is the preview missing? At least almost everywhere there should already be a preview shown…

Already implemented for the next release, see Hotkeys, anyone? - #16 by ubruhin

Thank you for taking the time to respond to my posting. A few points are revisited below. Apologies in advance if I’ve not followed the proper conventions for quoting.

I’m not sure what you mean exactly with copper pours - AFAIK this is just a different name for planes, or what would you expect to be different?

In my experience, copper pours are similar to planes on top and bottom layers, but a bit different in that they are usually placed after all other copper routing has been completed. When placed, the pour is almost always connected to an AC ground (e.g., a DC supply rail; less commonly earth ground) to improve noise immunity. Because they share a layer which typically includes a large number of routed traces, it’s often the case that islands will form where there is no path to the connected net. Depending upon the size of the island, it may be necessary to place a via which can tie it to the net or remove it entirely. (It’s bad practice to leave floating islands since they are vectors for coupled EMI.)

Pour placement and configuration are generally iterative processes, as it is sometimes beneficial to move traces and vias slightly to better optimize the way the pour is formed.

An outer layer diagram from a recently completed board design is shown below as an example. 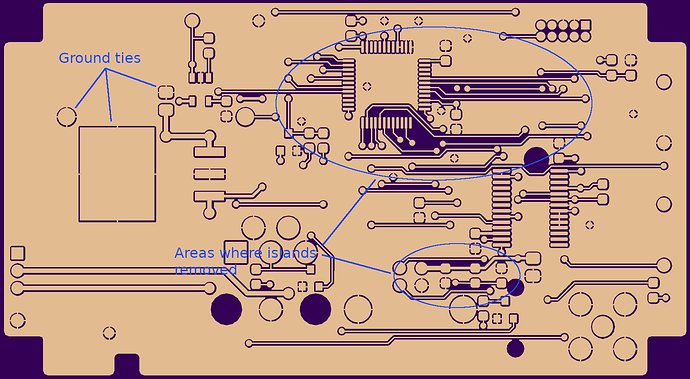 No, pads cannot be imported. Do you have an example how this works in other EDA tools?

I don’t recall if I’ve seen such a thing supported by other PCB tools. This and my subsequent questions regarding pad coordinates were aimed at identifying a straightforward way to create footprints for complicated packages. An extreme example would be some Yamaichi IC sockets for production testers I’ve used in the past which employed both imperial and metric spacing. One of the few benefits of KiCad is that relative pad coordinates are simple text objects, so it’s possible to generate a list and insert it into the .kicad_mod file.

Provide symbol and package previews when selecting components from libraries.

Where is the preview missing? At least almost everywhere there should already be a preview shown…

This is likely a procedural error on my part. I’ll need to look at component selection again when I have time. If it’s still not clear, I’ll post a follow-up question with a better description.